‘MY ABBEY ROAD MOMENT’
PISTE is also a sort of ‘situation’ that requires public participation to complete the work although, in a strict sense, the same applies to every work of art. In Netwerk Aalst, Ginckels built a wooden cycling track and he and a group of friends animated the structure, to great public applause. The work acted as a kind of trigger around which all kinds of activities and events were held, both in the art venue, and the public space. The piste, or track, was both a sculptural object and a vehicle for performances. Ginckels built the same wooden track as his contribution for the Young Belgian Art Prize at the Paleis voor Schone Kunsten in Brussels, but this time took a different approach. On this occasion, the track served as the starting point for another work. Constructed over two days, the track was inaugurated during a performance given before a select audience. The sound of the cycles racing around the track and the reverberations that echoed through the Horta Hall were recorded on the record HORTA x PISTE. The artist called it ‘My Abbey Road moment’. The track was then dismantled and the result of the recording was played as an installation on eight different record players. The spatial configuration was designed in such a way that the sound was almost palpable and, like the cyclists, seemed to move through the space. By using the record players and the track, the installation was almost a mash-up of two previous works, PISTE and 1000 BEATS.

Ginckels often samples elements from (earlier) works. During the race in PISTE the cyclists wore helmets made out of thousands of fragments of reflective glass, turning them into a HUMAN DISCO BALL. For a later work, the artist suspended 120 of the helmets, to form one enormous disco ball. This is typical of his diverse yet coherent oeuvre in which a single detail from one work can play a leading role in the next, in an endlessly bifurcating rhizome.

S.P.A.M. OFFICE
This is even more the case for S.P.A.M. OFFICE, Ginckels’ magnum opus. The artist began collecting spam e-mails and, before he knew it, had amassed an archive of five thousand e-mails. In every art space where S.P.A.M. OFFICE takes up residence, people are asked to forward as many spam e-mails as possible. ‘A perverse interaction’, Ginckels calls it, with a smile. The spam messages cover the entire spectrum, from Russian women in search of ‘love’ to the friend robbed while on holiday abroad, the business opportunity of a lifetime and, of course, the amazing miracle doodad that will expand your penis. The junk mail is then categorized in the S.P.A.M. OFFICE. In Be-Part Waregem the junk mail was sorted into around eighty large ring binders. S.P.A.M. OFFICE is a gesamtkunstwerk whose operations extend further than simply gathering junk e-mail. Ginckels also designed a company logo to feature on staff clothing, coffee cups and letterheads. He also designed matching office furniture, a kind of IKEA gone mad, designed to be clumsily assembled using plastic cable binders sticking out at the ends. During office hours, you can watch the staff knocking back Senseo coffee, filing away e-mails or just hanging about. ‘Visitors can wander through a large installation and watch a performance that lasts eight hours a day. It’s more than an installation; it’s also a performance, a kind of workshop, team-building session and occupational therapy.’ The work is a parody yet at the same time posits bureaucracy as a visual art practice. Ginckels creates a protocol but the ‘civil servants’ are free to interpret it in their own way. In ‘the London branch’, the staff came up with the idea of creating posters with slogans that acted as a pep talk or humorous intermezzo. These were hung on a message board or framed, and will function as autonomous art works within Ginckels’ broader oeuvre. With their Post-It notes, felt-tipped comments and Employee of the Month nominations, the posters are entirely at home within the typical world of corporate ethics. In his life and work, Ginckels offers an ironic commentary on the contemporary human condition: he holds business lunches in the Lunch Garden, his furniture is a nod to IKEA, and he sometimes deliberately has his texts translated into broken Google Translate language.

Ginckels artfully captures the spirit of the age in his spam archive. ‘When you see the endless collection of e-mails it’s really a temporal document. The layout and design are very specific. I want to keep an archive because junk e-mail will eventually die out as well.’ This is why he is currently scanning in his entire archive with plans to release it as a three-volume book running to thousands of pages. The books will come in a special case, a reference to the coffee table books produced by Taschen, along with a matching table. However, far from being a chic design object, Ginckels’ creation is an awkward thing, cobbled together from lengths of found timber.

ANTI-ENGINEERING
In his work, the artist often acts as a kind of archivist of trends and technologies that fizzle out almost as soon as they emerge. Take the first generation iPod – at one point a huge hype which only a few years later became obsolete and went out of production when new touchscreen models arrived on the market. Ginckels approaches the iPod sociologically as a sign of the times and, artistically, as a sculptural object. He translates the streamlined design into huge sheets of wood that he cuts out in his studio, including the characteristic click wheel and the rectangular screen of the iPod as a composition trouvée. Smartphones also feature in his work, although Ginckels refers to his as Dumbphones. Ginckels intentionally recreates them as clunky objects, fashioned together from roughly cut wood, with the nails, screws and blobs of glue still visible. His Dumbphones come in various models. The Bossa has a piece of perforated sandpaper in place of a microphone. The Korvette’s antenna is a long, broken section of a wood drill-bit.

Ginckels also turns his hand to the Dyson Airblade hand-drier, invented by technology guru James Dyson, and which is absurd, unwieldy and makes a racket. The artist produces these in coarse-grained wood, too. His so-called James Ensor Dyson I – VI includes different models, fashioned with the kind of ham-fistedness familiar from home-made bird houses or amateur handiwork. ‘I should really turn it into a weekend hobby project’ he says with a grin. Ginckels’ work intentionally exudes a high degree of anti-engineering. ‘On the one hand, I want to go with the flow and be part of our contemporary world. But on the other, I resist by making these bricolage versions.’ As the title of his exhibition The Embedded Outsider already conveys, Ginckels may participate in the system – evidenced by S.P.A.M. OFFICE – but then goes on to sabotage it, like a junk e-mail embedding itself in your computer like a virus.

Ginckels has created the wePod as a counterweight to the iPod; the wePod is a large pavilion shaped like an iPod where people gather. The skin of this structure consists of hundreds of sheets of paper printed with marble patterning. The patterns were specially produced for the project as faux marbre, a technique that fascinates the artist because, as a minutely precise copy of an authentic material, the patterns have an authenticity of their own. The texture of the fake marble inspired him to create a floor piece, Red Hot Andre, an ironic wink at Carl Andre. The faux precious material sits within IKEA frames which
immediately have the effect of downgrading it, while the reflective glass lends it the gloss of true marble. In this way, the artist continually plays with contrasts – real and fake, pure craftsmanship and industrial serialisation. As in his early work, Ginckels appropriates cultural objects and status symbols, giving them a sculptural makeover in which he replaces the original with his own, bastardised, version. Despite the deliberately cumbersome style, in Ginckels’ handmade version the industrialised mass product attains a uniqueness that lends it greater value than the original. So doing, the artist again subverts the system with a non-functional pirate version that is costlier than the functioning original.

The dark red sandpaper Ginckels uses for both the wePod and the Dumbphones and James Ensor Dyson I – VI, achieves its own individual status. It is sanded down to give it an unusual texture, reminiscent of marble. Ginckels places the worn sandpaper, with its varying degrees of coarseness, side by side to create an abstract composition. And so each work, including the making of, brings forth another, new work.

Sam Steverlynck, May 2014
Essay written on the occasion of the exhibition the Embedded Outsider in Be-Part, Waregem, Belgium 24 May - 1 June 2014 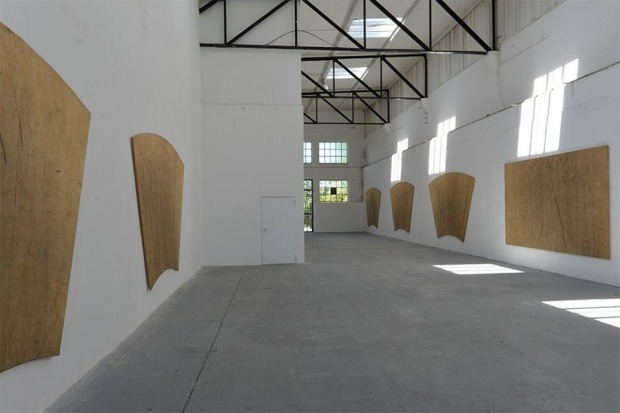 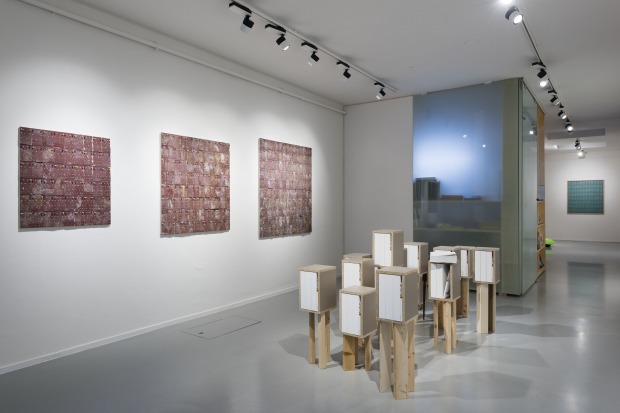 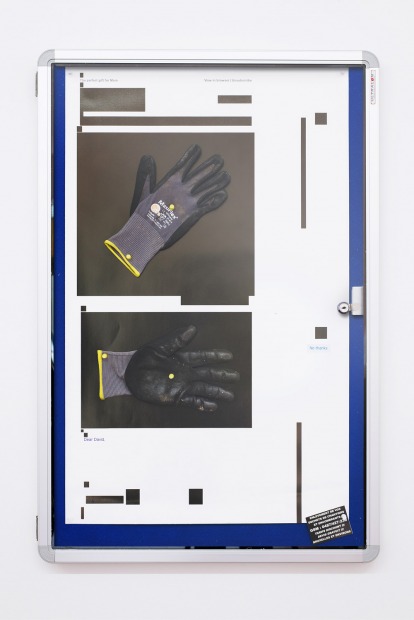 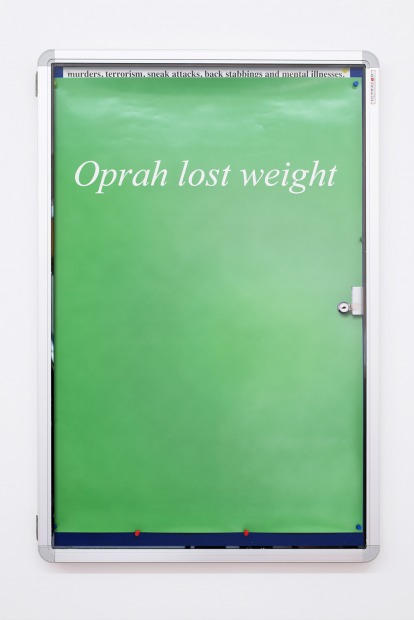 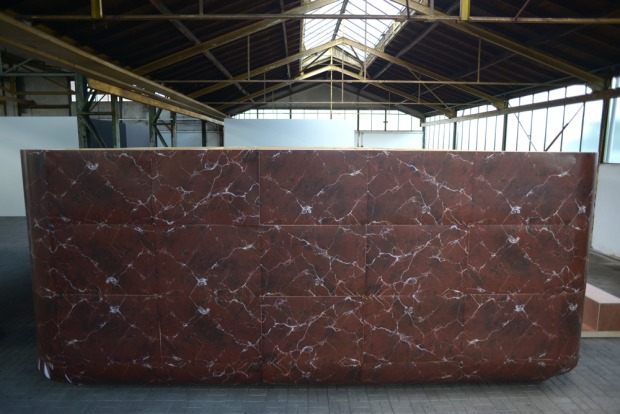 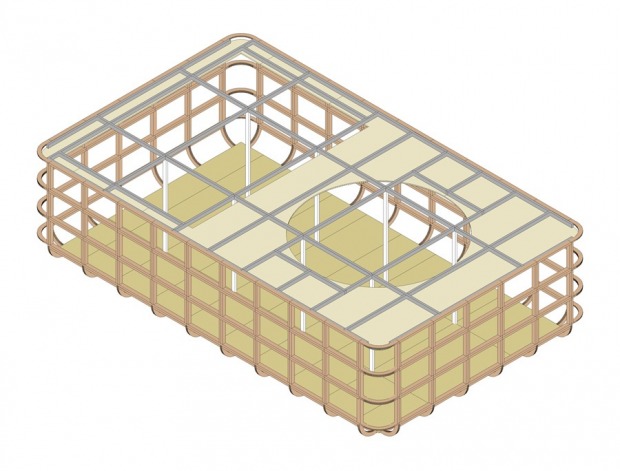 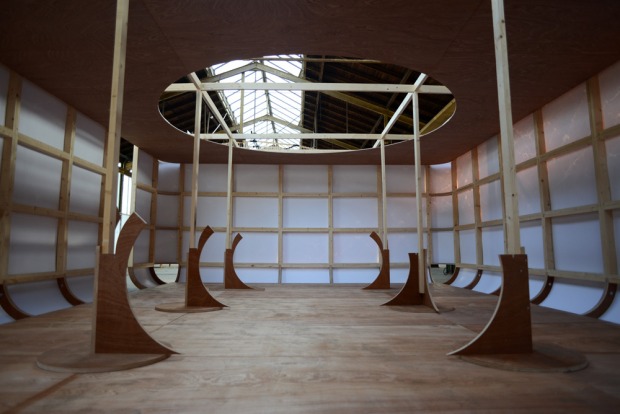 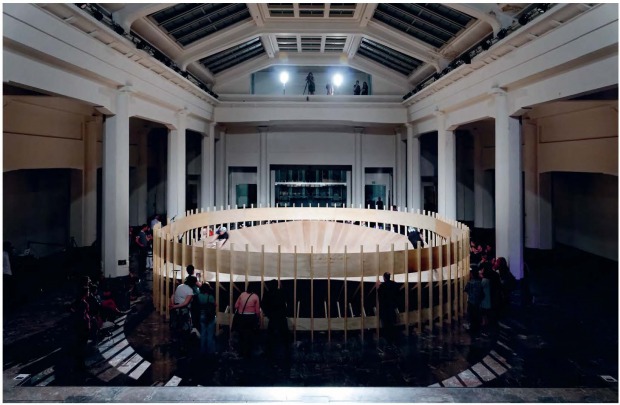 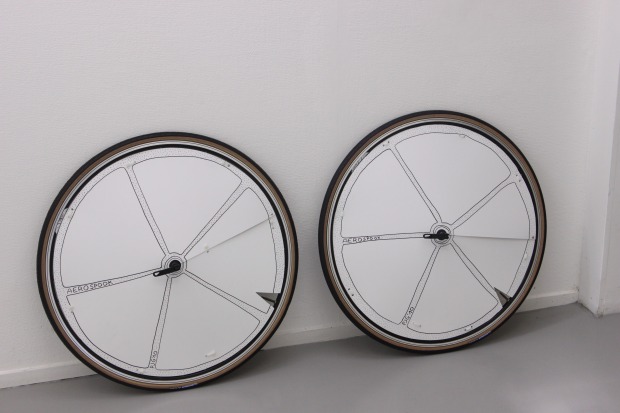 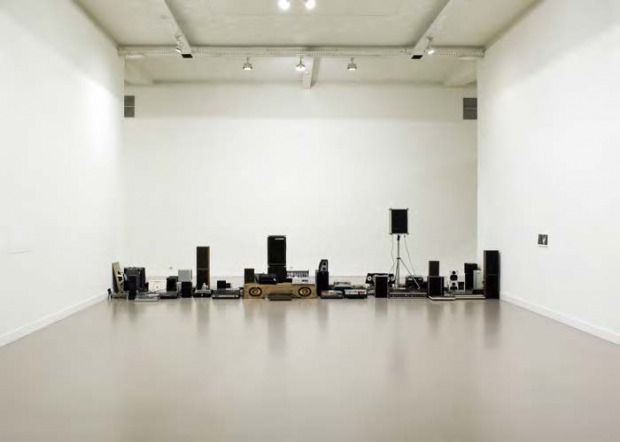