Carel Blotkamp (1945) is an art historian and artist. Since 1982 he has been professor of modern art history at the Vrije Universiteit in Amsterdam. Blotkamp is the author of numerous publications on subjects such as De Stijl and has written studies of artists including Mondriaan, Pyke Koch, Carel Visser, Daan van Golden and P. Struycken. He was co-founder and editor of the art magazines Simiolus and Jong Holland and wrote reviews for Vrij Nederland, NRC Handelsblad and DeVolkskrant. In addition to this, Carel Blotkamp has been active as an artist since 1967 and has exhibited his work frequently over the years.
In the exhibition Dutch Concert P. Struycken and Carel Blotkamp will show their recent works. In 2003/2004 and in 2014 the two artist collaborated. We are very pleased to show this 'duet'. 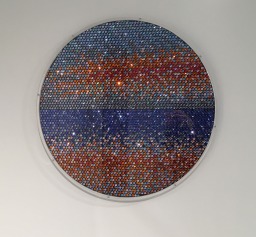