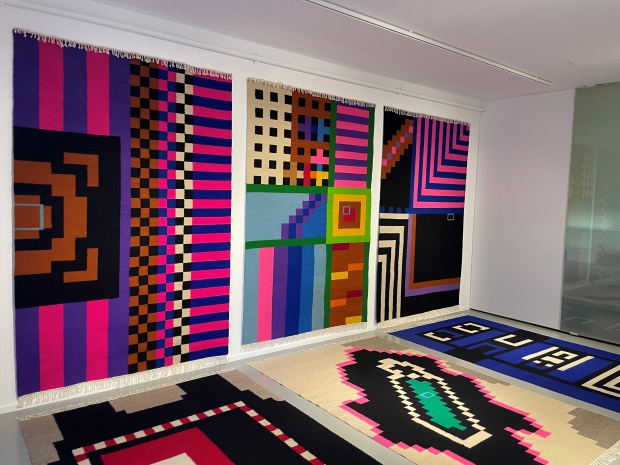 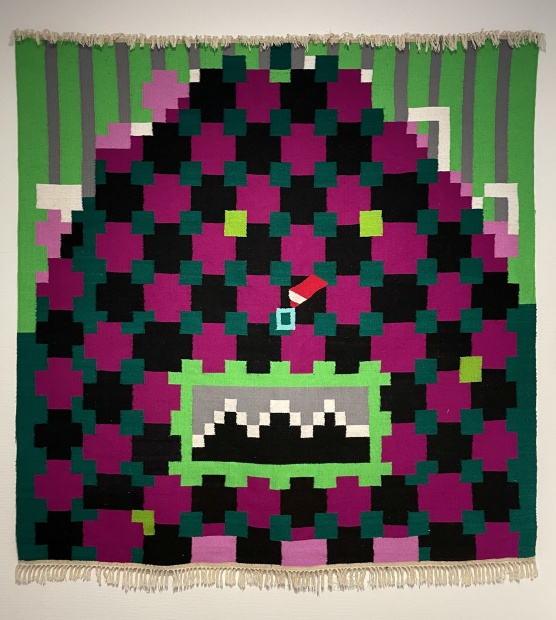 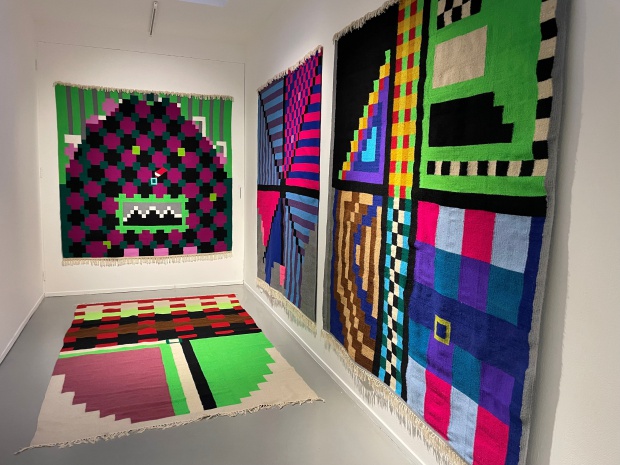 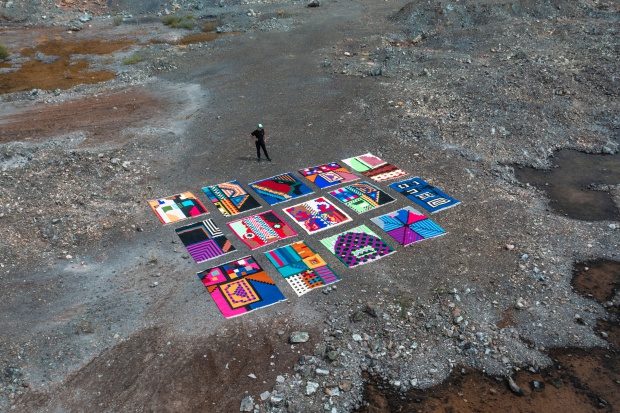 The exhibition Tintirinti presents a new body of work by Jakup Ferri and his son Jip, in the form of unique, hand-woven carpets.
Jip designed the carpets in the digital world of Animal Crossing, a children’s game that allows you to add blocks with the click of a mouse, and create colourful shirts or caps for the characters.

Made of up squares that look like pixels, the carpets are composed of brightly coloured geometric shapes and share the same seeming simplicity as Jakup Ferri’s earlier figurative works: scenes of everyday life poetically captured in pocket-sized drawings.

In his first video works, developed during a residency at the Rijksakademie in Amsterdam, Jakup Ferri offered a subtle, endearing and witty self-reflection on the isolation of the non-Western artist trying to hold his own in the Western art world. Ferri is particularly drawn to folk art and traditional artisanal techniques. After returning to his hometown of Prisina in Kosovo, Ferri embarked on collaborations with embroiderers and carpet weavers from Kosovo, villages in Albania, Suriname and Burkina Faso. Using traditional skills and methods, they created productions inspired by his drawings. This collaborative process also supported workshops and traditional crafts whose survival is threatened by capitalist production systems.

The carpets in this exhibition were hand-woven in Kosovo and Albania.

The title, Tintirinti, was chosen because it sounds playful, colourful and light-hearted, perhaps reflecting Jakup Ferri’s position as an artist. His work is indebted to outsider art and Western art practices.

Jakup Ferri (1981, Pristina, Kosovo, lives and works in Pristina and The Hague) is a contemporary artist and professor at the Pristina Art Academy. He studied at the Pristina Art Academy and the Rijksakademie in Amsterdam. In 2003 he was the recipient of two prestigious awards in Pristina: the Muslim Mulliqi Prize and the Artists of Tomorrow Award. In 2008 he received the Buning Brongers Award in Amsterdam. He has been artist-in-residence at numerous places, including the International Studio and Curatorial Program New York, Kultur Kontakt Austria. Besides private collections, his work is also part of the collection of Ludwig Museum - Museum of Contemporary Art, Budapest. Ferri’s work has been shown extensively in international (solo and group) exhibitions in museums and galleries, festivals and biennials, including Istanbul Biennial, Taipei Biennial, Cetinje Biennial, Kunsthalle Fridericianum; De Appel Amsterdam; The National Gallery of Kosovo, Ljubljana Biennial of Graphic Art, Art Rotterdam, The Centre for Historical Re-enactments, Johannesburg, South Africa, The Horse Hospital, London, De Hallen Haarlem, KW Institute for Contemporary Art Berlin. His work is currently on view in a solo show in Kunstraum Innsbruck.