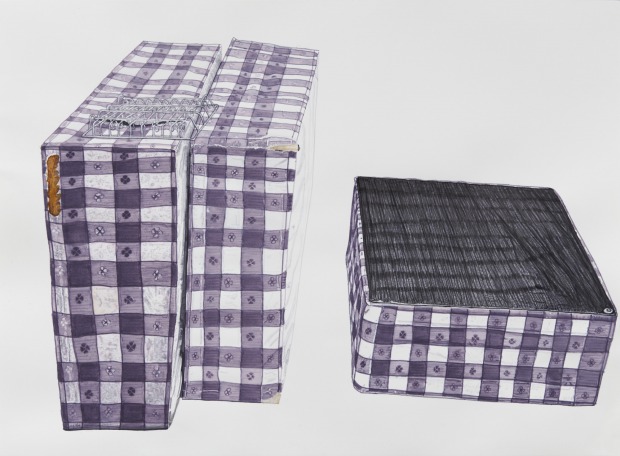 Throughout his career, British artist Michael Landy (1963) has been fascinated by issues relating to the nature of consumption, rampant overproduction and the way society values and discards things. His monumental installations explore political and social themes and frequently incorporate art-related objects.

Michael Landy is famous for his monumental installation Break Down (2001) in which he publicly and systematically destroyed all of his belongings, catalogued in detail in preceding years, shredding and pulverising everything from his Saab to his birth certificate in the shopfront of a former C&A department store in London. What remained was a comprehensive typed inventory of everything he owned, accumulated throughout his lifetime.

Destruction, reconstruction and renewal – recycling taken to the extreme – Michael Landy is perhaps the most radical of the generation of British artists to emerge from Goldsmiths in the late 80s and early 90s.

In addition to large-scale installation works, Landy is a virtuoso draughtsman and print-maker, working meticulously and exhaustively in series. Some drawings and etchings are rendered in minute detail, such as in the obsessively articulated botanical series Nourishment (2002). Often, as with In Your Face (2008), the vast group of 90 intimate portraits of his family and friends, they are extensive in their number or as with Breaking News (2015-2017), overwhelming in scale, a series where the artist created compelling installations of labour-intensive oil stick drawings using the codified language of icons and slogans.

In this exhibition, Michael Landy presents 3 different bodies of work. First, there are the Scaled-Down (2018) sculptures. Using a compacter designed to crush industrial waste, Landy turned earlier work into a series of compacted cubic sculptures. Series of work dating from 2004 to the present – including H.2.N.Y., Saints Alive, Breaking News - New York, In Your Face – were methodically compressed into neat, stacked cubes. Each cube’s distinctive texture derives from the material of the composite works. The process of compacting creates a series of layers which, like sedimentary rock, chronicle the history of past exhibitions and Landy’s labour. As such, the cubes are an embodiment of Landy’s personal artistic history; a compact catalogue raisoneé in miniature.

The Family Ruins (2020) series are watercolour drawings of traditional crofter cottages in rural Ireland, reduced to ruins over time and overrun by vegetation.
They are the start of Landy's investigation for his upcoming commission for the Museum of the Home in London, scheduled for 2021. Due to the travel ban imposed by the lockdown, Landy was unable to travel to Ireland and so researched typical ruins online. In carefully detailed watercolours, Landy renders these abandoned former homes in their rural isolation, in obsessively detailed brickwork or cradled in a lush natural landscape. Depicted in various stages of decay some, consumed by nature, are nothing but skeletal structures, while others stand defiantly intact amid a meadow. So embedded are these ruins in the landscape that they are ‘seen’ by neither man nor nature. Landy’s watercolours bring the ruins into our field of vision, elevating them to locations deserving of attention.
Each image is steeped in a deep sense of loss, both materially: a desire to be in a state other than that in which they currently exist, and immaterially: the forgotten histories and legacies of the people who lived there.

Something similar can be found in the series Drawing Rubbish. Here, in a sequence of watercolours, Landy documents large and small household items discarded by their owners on the street during lockdown. Detailed drawings of mattresses, a sofa with a scattering of old pillows, or a rocking horse offer a dispiriting glimpse into the objects’ former domestic lives. Unwanted, consumed and cast aside, these objects have a pathos. In essence, the drawings are endearing portraits that ask us to consider our urge to consume.