Yorishiro 依代 is a sequel to the film Shio 潮.Together the films are part of a project consisting of three short films in which the location, the small Japanese island Yonaguni where wild horses roam, plays a prominent role. In Shio these horses and a Japanese girl seem to be waiting for something or someone. In Yorishiro and in Stay (working title, not yet filmed) a young girl and a slightly older one arrive separately on this remote island. read more 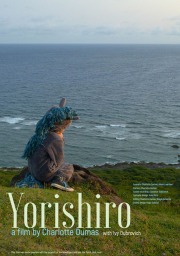