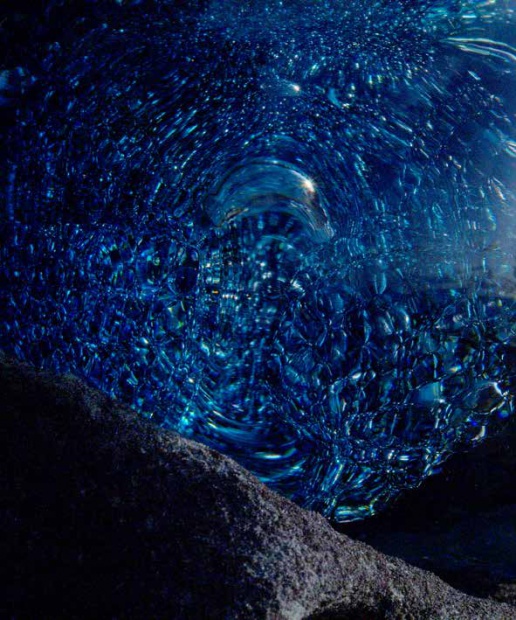 Since 2015, the Dutch artist Charlotte Dumas (Vlaardingen, 1977) has studied Japan’s endangered indigenous horses, particularly those native to the Japanese island of Yonaguni.

The wild horses in Dumas’ photographs and films are autonomous creatures. They stand stoically on the abandoned asphalt roads of the Japanese island of Yonaguni. Dumas first visited these horses during her project Stay (2014/2016), in which she photographed the last eight indigenous Japanese horse breeds. Once, these slender little horses fulfilled a vital role in the community as workhorses, but also with a religious function. With the advent of industrialisation and the importation of larger Western breeds, their practical usefulness ended, leading to a drastic reduction in their numbers. Yet, as an emblem of the region, Yonaguni horses continue to roam the island, which has been their home for centuries. The ponies that remain have been declared a protected living heritage.

YONAGUNI AND AO 青 (‘BLUE’)
The habitat of the Yonaguni horses bears traces of a terrible history. At the north-western tip of the island is a deep rock gorge. A site marked by tragedy. In the eighteenth century, pregnant women were forced to leap the ravine as a means of combating over-population. Today, this chasm is a place of commemoration. The arrival of a military base and a radar tower in 2016 transformed the island into a political pawn in the tensions between Japan and neighbouring China. As the island’s population dwindles and many buildings stand empty, the wild horses wander the craggy shores, confined to the island forever. In Dumas’ three recent photo series and films of the same name (Shio, Yorishiro and Ao), the energy and autonomy of the wild horses and the girls who figure in the films contrast with the island’s bleak past, suggesting an emotional reciprocity between man and animal.

Ao 青 (‘Blue’), an unusual shade of indigo, recurs as a leitmotiv. Using traditional methods, local clothing designer Yuko Kitta distils the dye from plants indigenous to the island. The colour blue also appears as a reflection in round glass objects, connecting the Japanese landscape, the native horses and the girls.

INTIMATE PHOTO PORTRAITS
Dumas’ slender little Yonaguni horses are majestic in their vulnerability, and imbued with an almost magical aura. Charlotte Dumas is known for the intimacy of her photographic portraits of horses, dogs, wolves, and tigers. ‘The portrait has to transcend itself. It needs to have an exceptional concentration. I want the viewer to feel alone with the image, so that a momentary kinship can arise with the animal in the photo.’ Dumas’ earlier subjects have included rescue dogs (Retrieved) searching for survivors in the collapsed buildings after 9/11, police horses, and the caisson horses from the military cemetery in Arlington (USA) (Anima). In modern societies, people and animals have very little meaningful contact. Dumas looks for places where contact between humans and animals endures and examines how their mutual relations have changed over time. The ambivalence of this relationship fascinates her. Dumas photographs animals after their work is done, and they have been relieved of the function and symbolism that we attribute to animals. With this, Dumas penetrates to the core and individuality of the animals she photographs and films. As an artist, she captures the essence and autonomy of both people and animals.

Dumas was educated at the Gerrit Rietveld Academy (1996-2000) and the Rijksakademie van Beeldende Kunsten (2000-2001), both in Amsterdam. Since 2012, Dumas has also made films in addition to photographic work. Her work has been exhibited in venues including De Pont museum (Tilburg), The Photographers Gallery (London), Huis Marseille (Amsterdam) and at the Fondation Hermès (Tokyo). Her work is represented in important museum and private collections.