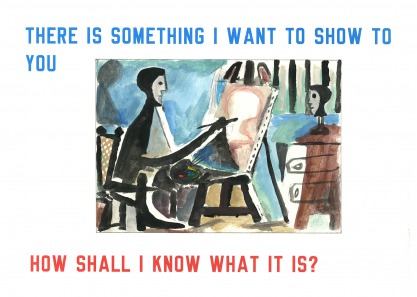 The Painter is Marijn van Kreij’s fourth solo exhibition at the gallery and the fifth in a series of exhibitions centred around the late work of Picasso. Re-using existing imagery, repetition and the act of drawing itself are at the core of Van Kreij’s versatile practice. At the gallery a series of new drawings will be presented in an installation complemented by several stools and mobiles. The exhibition also includes an audio fragment from the novel The Making of Americans (1925) by Gertrude Stein who, in her day and discipline, set out to palpably show that repetition is a fundamental principle of life.

Earlier exhibitions in this series were: Nude in the Studio at Marres, Maastricht and Post, Tokyo (2018); Reclining Nude with a Man Playing the Guitar at Hermitage, Amsterdam (2017) and Nude in Front of a Garden at KLEMM’S, Berlin (2016).

Marijn van Kreij (Middelrode, 1978) lives and works in Amsterdam and teaches at the Gerrit Rietveld Academie. His work is also currently on view in the group exhibition Bauhaus& | Modern Textiles in the Netherlands at Textielmuseum, Tilburg, and from the 13 September his work will be featured in Speak, Memory in W139, Amsterdam.

At the invitation of the artist, Josh Cheatham and Nickel van Duijvenboden will perform a short recital at the opening on Saturday 7 September, at 4 p.m.