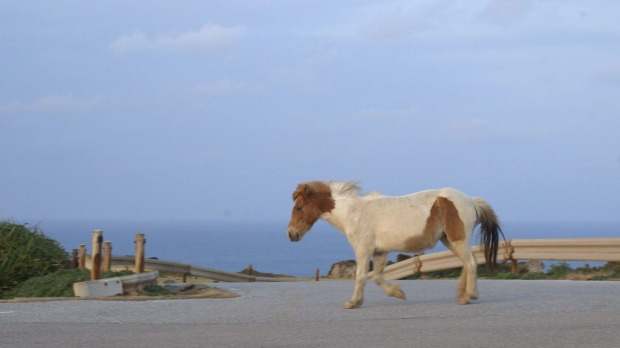 Shio, the Japanese word for ‘tide’ is very important for people living on the islands in South Western Japan. It refers not only to high and low tides but also to the currents running between the islands that decide the favorability of sea travel between them. If the shio is not right it will be difficult to manoeuver across the seas. In this film the horses of Yonaguni island, the most South Western island of Japan, are seen ambling freely as they live independently on this small volcanic island where some 120 of them still remain. The island has had a turbulent past and is a political pawn since the placing of a radar tower and military base in 2016. As the human population keeps declining, the horses, unable to leave the island, seem to defiantly roam their habitat along the steep rugged coastlines. Using the elements of nature, a young girl and her horse might find a way to conquer the shio.

Charlotte Dumas (born 1977, Lives in Amsterdam) work focuses on series of animals in relation to humans. Among her subjects; Horses working in forests, pulling logs and the funerary horses of Arlington National Cemetery that accompany fallen soldiers to their final resting place. Rescue dogs who, in the aftermath of the 9/11 attacks, searched day and night for survivors at the Pentagon and World Trade Center. Horses living in the wild, on the fringes of Nevada towns, or on small islands in Japan. The notion that the state of humanity can be read and studied by the way we relate to animals is a vital thread in Charlotte Dumas’ work. Her choice of subject relates directly to the way we use, co-exist and define specific animals, assigning various symbolisms as well as our own personal reflections to them.

We are looking forward to welcome you at LOOP!