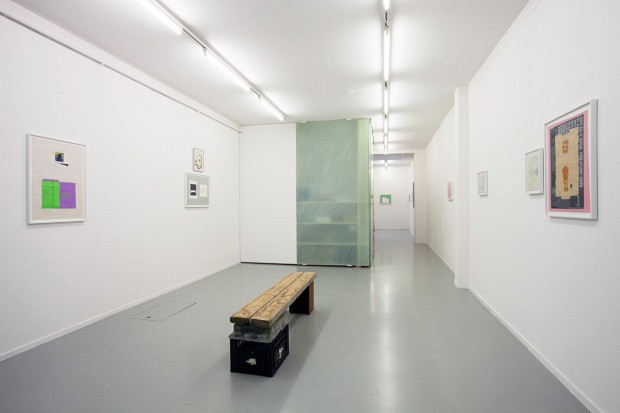 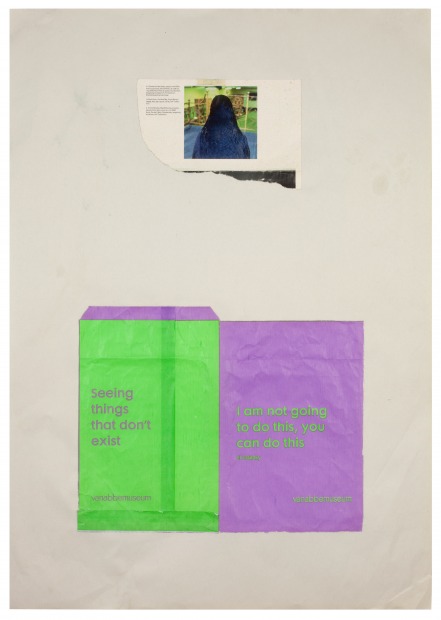 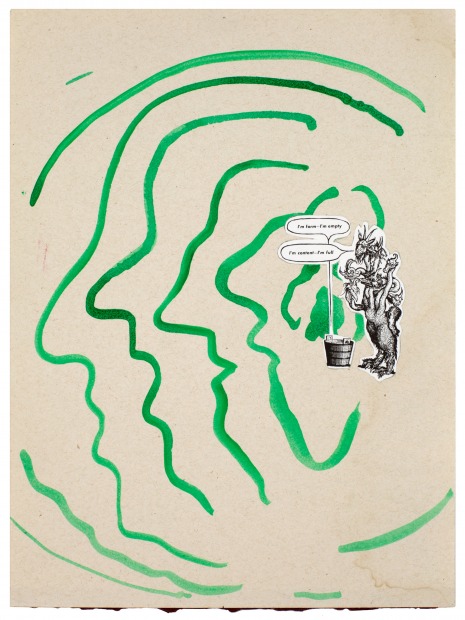 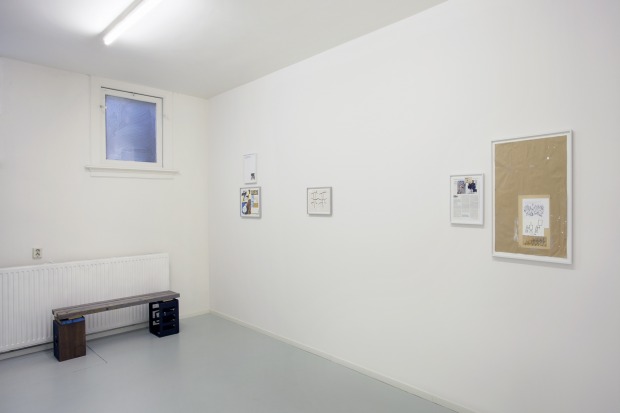 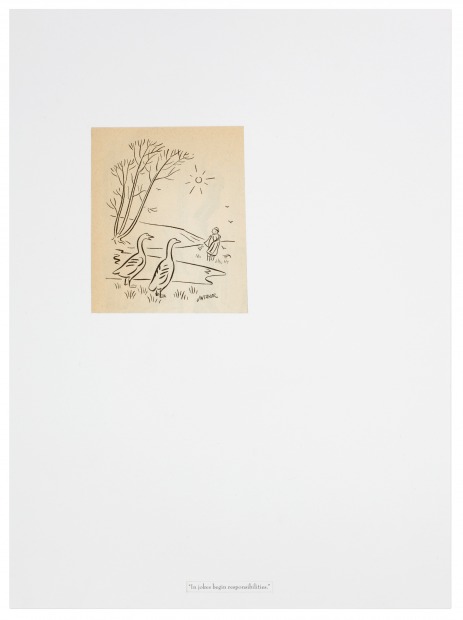 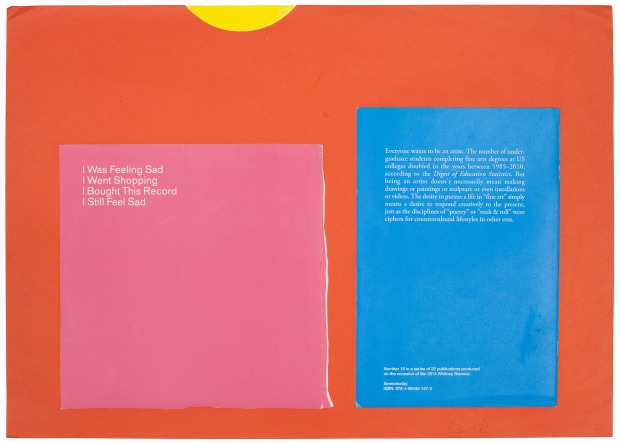 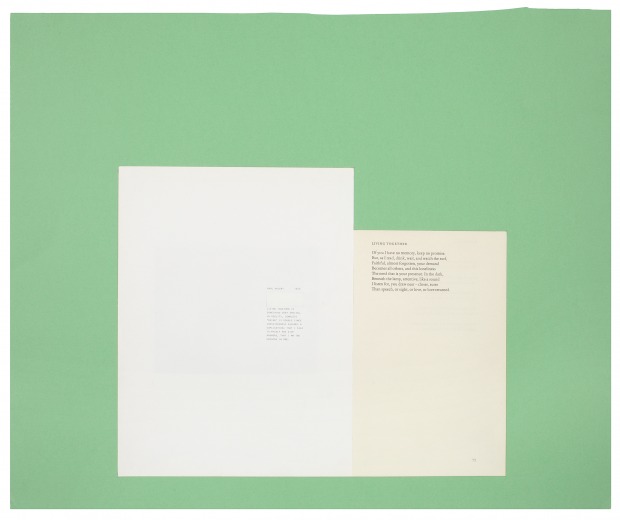 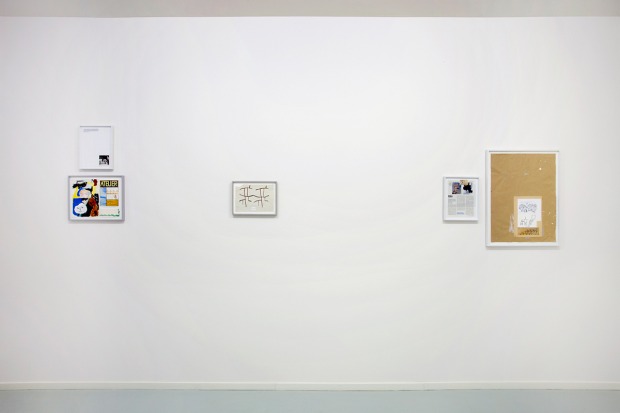 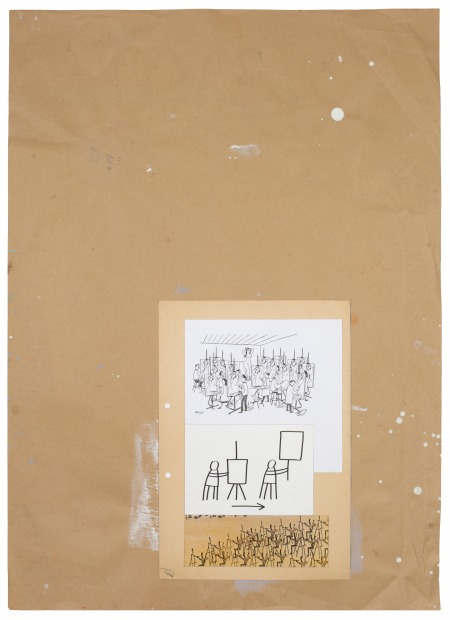 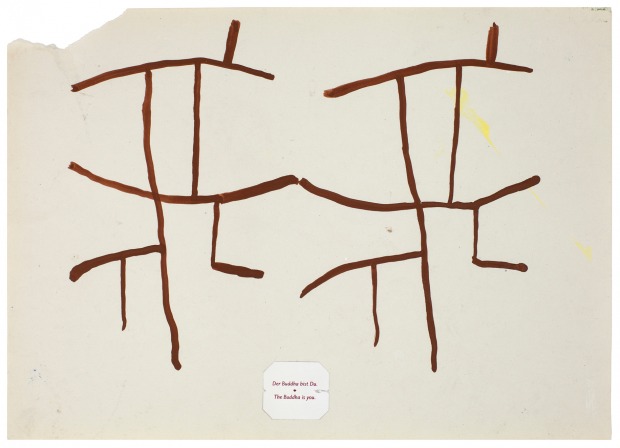 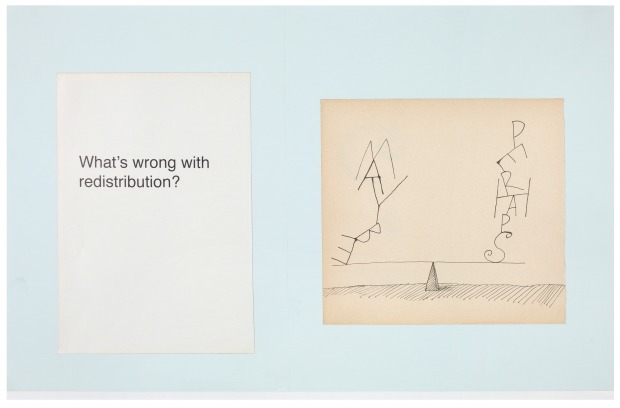 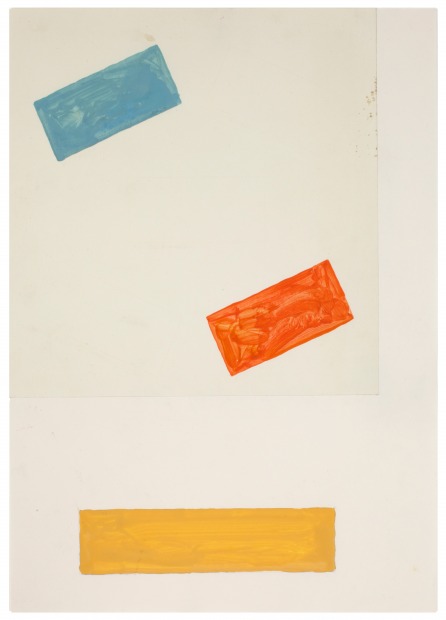 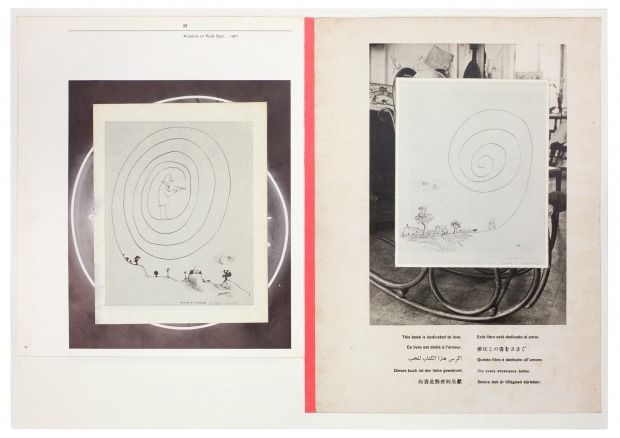 Marijn van Kreij’s works in the exhibition Range Anxiety are delicate and intimate. At first sight they might appear to be made from studio leftovers: cut-out bits of texts, images, cartoons, and art world paraphernalia are glued together on coloured paper or combined with drawings. It’s as though Van Kreij put them there as casual sketches—small attempts testing out an artistic intuition that became manifest in the margins of his painting practice. Yet as one looks at these works a little longer, it becomes clear that their simplicity is deceptive. Their haphazard appearance is the careful outcome of a concentrated process of looking, thinking and feeling. They are miniature visual poems that open up a special imaginative space in the mind of the viewer, and what they offer is much more than a visual pun.

In the exhibition the works are framed by the words Range Anxiety, taken from the title of an album by the band Twerps. The term describes the fear of running out of fuel and getting stuck somewhere, without the ability to recharge the battery or fill the tank. Here, the fear has a more existential meaning: the fear of not being able to connect with a place away from home. Though it often goes undefined, we all experience it, perhaps most commonly on holiday or during a business trip. When away from home you are never confident whether your language, etiquette, and even your basic ability to find food, drink and a place to sleep will be enough. Can you survive away from home?

It is of course also a fear that is felt most significantly by migrants. At the beginning of their journey, they go through a traumatic phase of range anxiety, something that will always remain as a murmuring presence. Years later, this fear can suddenly erupt into an uncontrollable emotion: I have to get back home!

The range does not have to be dependent on physical distance, however. It can happen when switching jobs in the same company, when trying to connect to your neighbours, even when trying to connect to yourself. It is this nameless fear of not being equipped with the right skills to find a harmonious relationship with your surroundings; a fear that undoubtedly has accompanied mankind through its entire evolution, but which has an intensity and ferocity today that is suffocating. Standing amidst the constant storm of digital waves of information crashing down on you, it is increasingly difficult to orient yourself, prompting a voice inside to ask: Who are you to know where you are?

Van Kreij experiences this fear in his artistic practice rooted in a world that he sees is in a state of demise. To put it somewhat bluntly, as a Dutch, white, male artist, he is a late incarnation of the tradition of Western modern art. It is not easy to be a child of this legacy, something I experience myself being equally white, male and Dutch, and educated in the same tradition. For us the erotic heroism and machismo of modern art is definitely over. We stand on shaky ground and are uncertain if within the rubble of the modern it is possible to again create a position that allows us to engage with the world in a meaningful and future-oriented way. We look at what was offered to us in the form of aesthetic awareness and skill, and wonder if these tools that at times feel so tainted and utterly inefficient are still the best we have to reach out to the world and the people around us. This is what makes Van Kreij’s works so fragile, honest and intense.

For this series the method of production is not very complex. The works are kinds of collages composed out of coloured sheets of paper that form the ‘background’ on which images and pieces of texts are placed. In reality there is no real foreground or background as everything is cut out and glued ‘in’ to each other, thereby appearing on one plane. The quotes and images present things that relate predominantly to art, from an anecdote about Max Ernst’s father to a quote from Paul Valéry. These quotes can also be slightly more circumstantial. For instance, in a cartoon with a multi-headed monster and a bucket, the bucket states, ‘I’m form, I’m empty,’ to which the monster responds, ‘I’m content, I’m full.’ Some of the works contain painted shapes or outlines of shapes, evoking the history of modern art. It is easy for the works to feel unbearably heavy. The isolated quotes can have the solemn effect of finally revealing a hidden truth. Yet this emotion, this heaviness, is constantly broken or set back in balance. Humour is inserted strategically through cartoons, such as the above, or small quotes with more levity—necessary oxygen to disrupt the weighty emotions that inform these works.

Even if the production method is not very complex, the works are very precise in structure. Looking closer at one work, Untitled (Redistribution, Wolfgang Tillmans, Saul Steinberg), 2015, for instance, one can see that its ‘foundation’ is made up of two sheets of light blue paper, with a tiny strip of white paper across the bottom. Inserted in the middle on the left of the blue papers is a white A4-sized sheet with the sentence: ‘What’s wrong with redistribution?’ It seems to be a page cut out of a book or a magazine, in simple Helvetica typeface. In the middle on the right is another page from a book with a printed ink drawing on old, brownish coloured paper. The image is of a scale indicated through a cone, standing on unidentified ground, with a line on top of it. On the scale the word ‘maybe’ dances uncertainly on the left, kept in place by an equally dodgy ‘perhaps’ on the right.

The two different book pages are like two conflicting personalities in a dialogue. The left has the activist energy of hard idealism. This surety is reinforced by the use of industrial Helvetica letters, whose self-confidence insinuates that their response to their own question would be: ‘Nothing is wrong with redistribution, don’t you know that?!’ Even the typesetting introduces a sensation of certainty. It’s easy to imagine that the pages that follow this will explain to us how good redistribution is, or even how we can realise it. The drawing on the right tells a completely different story. A tumbling ‘maybe’ balanced by a precarious ‘perhaps’ offers an image of complete and absolute uncertainty. Two doubts holding each other captive. Together with the paper on the left, the work presents a simple opposition of the certain and the uncertain.

Only there is more. The blue paper situates both drawings in a pictorial space. Without the blue paper the opposition would be strong but almost cliché, a mere pun. The blue adds an atmosphere to the work, creating a space between two positions. They could be two moods you have over the course of a day. You start self-assured and ready to take over the world after morning coffee, but then, late at night, doubt kicks in. What remains is an endless and ineffective rehearsing of options. The blue space is not a deep space, an illusionary space in which things can be placed. It is a mental space, a temporal space, in which different sentiments can coexist. The work describes an emotional curve that is complete, from day to night, but there is one more ingredient: the small white stripe at the bottom.

This small slip of paper could be understood in the most literal, formal sense as the modernist foundation of the work. The work stands on this white step, which also breaks the homogeneous quality of the blue. It carries the blue, but also unmasks it. Metaphorically the blue is a space, but of course in reality it is only paper. What we read into the blue is our own production, or at least a co-production of the work. The thin white line makes the condition of production of the image transparent; it is an answer to the age-old modernist battle against illusions. The white line, subtle as it may be, gives the work a philosophical weight while also framing the two statements and the blue plane that surrounds them. The line makes apparent that in the end, or the beginning, the work is paper and ink, in short, matter. This matter is arranged by many people: those who made the paper, the ink, the words, the drawing, the book design, etc. And all this work is then rearranged by Van Kreij.

It is this arrangement that causes me to think about its possible meaning, which will always remain speculative. Whatever I think, it exists within me and is of a different nature than the matter that started the process that made me think. This is the source of the abyss of existential doubt, one that gives rise to the question: How can I ever be certain? It is a question that comes with a positive side, as only through doubt can I know that I exist.

The work itself has no awareness: the paper is dumb; the ink is dumb. The artist, the viewer, they give it meaning. But due to its existence as an idea, the meaning will always be fundamentally dislocated from the material, and therefore never a certainty. This is the existential doubt modern art draws from and seeks to negotiate, and in vain moments perhaps even tries to resolve. Van Kreij is not vain. The work is not an answer, but a companion to a life lived in certain uncertainty. It helps us to become aware of the bleak light that shines beyond the modern, and perhaps even find some comfort in it, the comfort necessary to go on.

*With special thanks to Janine Armin for all the work done on the text.